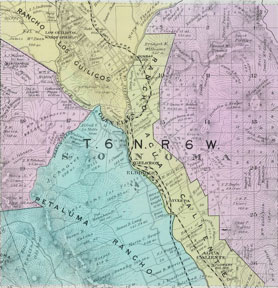 As homesteaders in the valley became farmers, and as the community of Glen Ellen began to grow, commitment to a vision of future possibilities, including social responsibilities began to appear. A state home for severely disabled children was established nearby, bringing people engaged in social services. A major literary figure adopted our valley as his chosen home, and a significant patron of the arts established her ranch, where much of the planning of WWII took place.

The State Home at Eldridge
A state institution was established here in 1891, bringing caring, committed people to help establish Glen Ellen as a thriving community.

Jack London
The name Jack London needs no introduction— his books are well known throughout the world. However, not everyone knows that Jack lived right here in Glen Ellen, from 1905 until his death in 1916.

“Hap” Arnold
Arnold Drive— once known as Grand Avenue— is named after General Henry Harley “Hap” Arnold. Arnold is widely considered the architect of the Air Force, and is the only person ever to hold a five-star rank in two different U.S. military services.