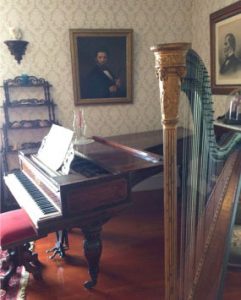 The story of how General Vallejo came to oﬀer all of Agua Caliente— the rancho originally granted to his oﬃcer Lázaro Piña— to Andrés Höppener in the spring of 1846 in exchange for five years of piano lessons for members of his family, has become a well- known local legend. Captain Stephen Smith had brought three pianos in his ship from Baltimore, the first to arrive in California. The General bought one, but there was no one in the Vallejo household who could play it, hence Höppner’s employment. The details of the conveyance of the land from Piña to Höppener by the agency of Vallejo, however, remain remarkably unclear to this day.

Höppener was a successful entrepreneur and businessman from the Russian colony in Alaska, who had already become well established as a professor of music and languages in San Francisco. The eating contest in which Höppner bested Jean Jacques Vioget is described in detail by William Heath Davis in his Seventy-Five Years in San Francisco. Vioget was a prominent San Francisco resident and prosperous saloon keeper, an excellent violinist, and the civil engineer that surveyed the lands of Captain Sutter; eventually he became captain of the brig Euphemia.

After receiving the Agua Caliente grant Höppener immediately subdivided the land, and became the first to develop and commercialize the hot springs of the area as a tourist destination.