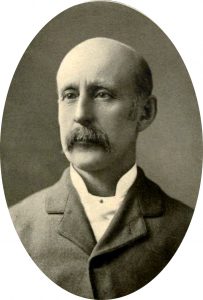 Julius A. Poppe, married to Katherine Bohr Poppe, was a local rancher from 1851 to 1864; he then opened a general merchandise store in Sonoma, which he operated until his death in 1879.

His son Charles A. Poppe was born November 21st, 1853. Charles managed the family store in Sonoma until 1883, when he married Caroline H. Martens, and they opened their own store selling “Dry Goods, Groceries and General Merchandise”, establishing what was to become the business district in Glen Ellen.

The Glen Ellen Post Office was moved into his building, and Poppe served as postmaster for many years, from 1890 to 1916. In 1884 he served as clerk of the school board, and in 1888 he was secretary of the Native Sons of the Golden West. Poppe also served as clerk and treasurer of the First Congregational Church, which was built in 1894.

An unidentified newspaper clipping tells that on the evening of February 2nd, 1888, there was a meeting of the “Bald Headed Club” in Glen Ellen, and it “had quite a number attending— John Peters, T. J. Sullivan, Chas. J. Poppe, J. Chauvet, Bot Miller. Ayer’s Hair Vigor was decided as the most suitable restorative.”

The wooden store burned to the ground July 4th, 1905, and was quickly replaced by a two story stone building. Then, in the following year, the new stone building was severely damaged by the great earthquake on April 18th. The upper floor was then replaced by wooden 2nd and 3rd floors. At some time later the third floor was removed.