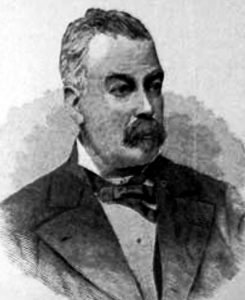 Dr. Charles C. O’Donnell was a controversial figure, whose impact on Glen Ellen is felt to this day. He was born in Baltimore, Maryland in 1835, and came to San Francisco in 1854, where he established his medical practice by the early ’Sixties. Although he was charged with “conduct unbecoming an officer” in the National Guard and arrested for murder in what appears to have been failed abortions in the early ‘Seventies, he was acquitted of all these charges and went on to become a successful businessman.

O’Donnell helped organize the Workingmen Party, and served as a San Francisco delegate to the second California Constitutional Convention in 1878-79. There he argued vehemently against Charles Stuart, a delegate from Glen Ellen who strongly defended the Chinese.

In 1891 O’Donnell arrived in Glen Ellen to build a luxurious summer home called Cozy Castle, where he lived with his wife Emma and their son George, as well as in San Francisco where he continue to maintain his practice. He built an extensive mineral springs resort along Sonoma Creek in what became the O’Donnell Tract, which was described in detail in the 1898 atlas published by Reynolds & Proctor.

In 1903 coal and clay suitable for brick and pottery was discovered on his Glen Ellen property, and work began on constructing kilns in partnership with Joshua Chauvet, another early Glen Ellen entrepreneur. The California Brick and Pottery Company was organized in San Francisco with a capital of $40,000, under the operation of C. Hidaker and Joshua Chauvet’s son, Henry. The plant was capable of making 40,000 bricks per day at first, but by 1905 the kilns were firing 250,000 bricks.