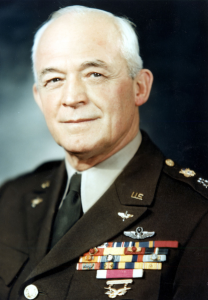 A true pioneer, Arnold learned flight from the Wright Brothers, and became one of the first military pilots. He overcame a fear of flying due to his experiences with early flight, and rose to command the Army Air Forces immediately prior to U.S. entry into World War II, and directed its expansion into the largest and most powerful Air Force in the world.

Arnold’s most widely used nickname “Hap” was short for “Happy”, attributed variously to work associates when he was a stunt pilot, or to his wife, who began using the nickname in her correspondence following the death of Arnold’s mother in 1931.

During the war Alma Spreckels made her 2,100-acre ranch near Glen Ellen available to the troops at Hamilton Air Force Base. Arnold attended many high level military planning meetings in this peaceful setting throughout the war, and he deeply appreciated the serenity he found here. In 1943 he finally purchased his own ranch, “El Rancho Feliz” (the Happy Ranch) nearby on the flank of Sonoma Mountain, though it wasn’t until after the war was over that he could realize his life long dream to begin farming.

He became an enthusiastic host, as well. Over the next four years, until his death in 1950 at the age of 63, he and his wife entertained many guests such as Army general and Secretary of State George C. Marshall, Gen. James Doolittle, famed broadcaster Lowell Thomas, and California governor and Chief Justice of the United States Earl Warren.