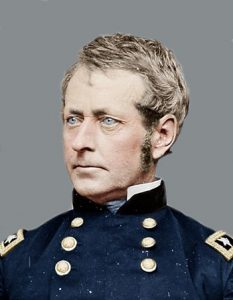 For more than a decade, after the Mexican American War and before the Civil War, Joseph Hooker was stationed in the Valley of the Moon as a Lieutenant Colonel. One of the younger and few clean-shaven American oﬃcers, he was popular with the local senoritas, and developed a reputation for handling his drink and his women.

Restless to take part in public service he campaigned— unsuccessfully— for state senate, and eventually settled upon a large section of the Rancho Agua Caliente. Hooker worked the land himself, with the help of men like John K. Jenkins, who wrote this description of farming life then in Sonoma Valley.

“Some of the ground on which he raised Barley was so very rough that we could not rake it, and he employed a small tribe of Indians to pick it up and lay it in piles… As fast as we cleaned the barley, it was put up into gunny bags and weighed and marked ready for market. At the time this barley was sewn it was worth fifteen cents per pound, and when harvested and threshed, was worth from one and a half to two cents, so that the thing that made men rich the year before, made them poor this year… such was the fickle fortune in California…”

It should be said that, although Hooker’s name bears unfortunate similarity to a popular synonym for prostitutes, the term originated elsewhere and had appeared in print many years before his stay in Sonoma. Likewise, he abhorred the sobriquet “Fighting Joe”, which was the result of a typographical error in an eastern newspaper. Jeﬀerson Davis used to annoy him greatly by referring to him as “Mr. F. J. Hooker”.

Hooker’s relationship with President Lincoln was very close. Unlike other generals, he was frequently invited to the White House for breakfast and other informal visits. As the Civil War loomed Hooker wrote directly to Lincoln asking to take part, and was appointed brigadier general in 1861.