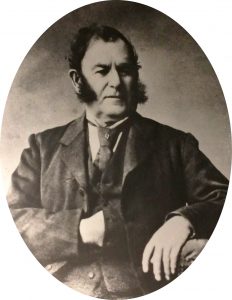 In 1833 Mariano Guadalupe Vallejo, the young commandante of the presidio at Yerba Buena (as San Francisco was then known), was sent north by the Mexican government to explore the unclaimed countryside and to observe the Russian presence at Fort Ross and Bodega Bay. On his way he crossed a fertile valley, where he built a small house and corral. In the spring he petitioned for a grant of land where he could bring livestock.

The land grant named Petaluma was approved in June 1834; it included that valley and the mountain beyond it. The northern boundary of the grant was indicated by a confluence of two streams, where he built a sawmill in 1839; that mill still stands in Glen Ellen today, though it has changed over the years.

As commandante of Sonoma and the entire northern frontier of Mexico, Vallejo became the majordomo of the Valley of the Moon, presiding over the secularization of the mission and the dispersal of its lands. A visionary and a pragmatist at the same time, he welcome settlers and successfully steered the valley— and all of Alta California— through tumultuous times. When California became the 32nd state of the US, decades later, he became state senator.